The Paper: In a new paper in the journal Peerj, an international team of scientists, working in Área de Conservación Guanacaste (ACG), used 25 years of reef survey and sea surface temperature data to document changes in coral cover and composition of six marginal reefs in the Papagayo region on the Pacific coast of Costa Rica. The team wanted to understand the factors behind a catastrophic coral die-off event in 2009, which resulted in a coral cover loss of between 20 and 100 percent. They found that a rapid sea temperature drop of up to 10 degrees Celsius was the primary cause of the event. A widespread rise in harmful algal blooms at the same time – likely a result of coastal development south of the area — was a contributing factor in the demise of the coral. The researchers say upwellings that result in dramatic sea temperature fluctuations are key to understanding how to manage reef systems; ACG is home to the Costa Rican Dome, which is an upwelling that brings deep-ocean mineral-rich waters to the surface and is one reason for the high underwater biodiversity found in this ecosystem. The lack of coral recovery in the decade since the die-off, the authors write, “indicates a breach in ecosystem tipping-point and highlights a need for resilience-based management (RBM) and restoration.” GDFCF Technical Advisor Dr. Robert Puschendorf, a lecturer in conservation biology at the University of Plymouth, United Kingdom, and one of the paper’s authors, says, “The demise of coral reefs is very much linked to global warming and marine heatwaves. However, local and tailor-made conservation strategies might help to conserve the remaining reefs in our ocean. If we involve local communities and improve governance on how we manage waste water and other factors, that can decrease the extent and intensity of the harmful algal blooms. The issues of global warming and extreme climate events are obviously something far bigger, but this study demonstrates the actions people can take in the meantime.” The paper is here and a press release about the article is here.

The Background: The vast majority of the data used in this paper was, according to Rob Puschendorf, thanks to the hard work of María Marta Chavarría, now co-director of the research program in ACG, and that of Carlos Jimenez, who, at the time was with the Centro de Investigación en Ciencias del Mar y Limnologia (CIMAR) at the University of Costa Rica and is now with the Cyprus Institute in Cyprus. Dr. Caroline Palmer conducted the most recent monitoring of the area, which provided the end point to write the paper. According to María Marta, the demise of these reefs is “a very sad story that we were able to document to the best of our ability... in those years we were very happy about the growth and health of the reefs, until the product of very cold outcrops due to the upwelling of Papagayo and frequent algal blooms ended up killing our most important coral reefs.” 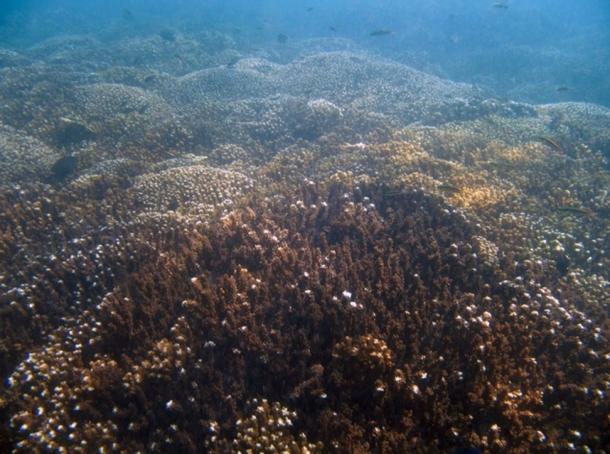 A thriving coral reef in ACG prior to the 2009 die-off. Photo by Carlos Jimenez.