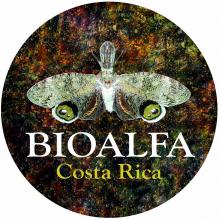 Costa Rica’s natural heritage is one-million-plus species of wild multicellular organisms. It is 4% of the world’s biodiversity. These species live everywhere in the country, but they are concentrated in the 25% that is natural forest and in unperturbed marine ecosystems. To incorporate and integrate these species and their ecosystems into Costa Rica’s socio-economic fabric, and therefore sustain them into perpetuity, we need to come to intensively know who they are, where they live, what they do, how to find them, and freely distribute this information to all society. The way to accomplish this is via DNA barcoding, or molecular analysis, so we can have precise identifications of every species in Costa Rica. These barcodes will be placed in an open-source, publicly available database. With this web-based biodiversity encyclopedia, a bioliterate society has diverse opportunities to non-damagingly use this enormous national resource and minimize its footprints on it. GDFCF supports and helps facilitate Costa Rica’s stated goal to become the first tropical country in the world to fully know its biodiversity via the ambitious BioAlfa project, which was formally launched by a Presidential Decree in June, 2019. A variety of articles, papers, and presentations have been produced that further elaborate on this bold vision to advance tropical biodiversity conservation in the 21st century. 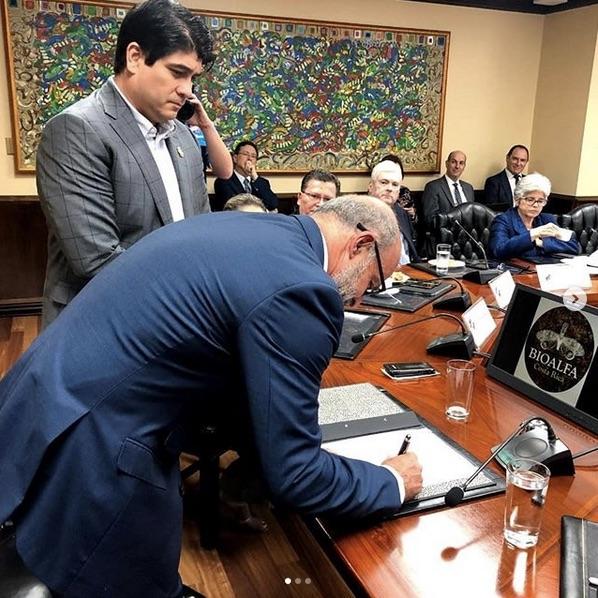 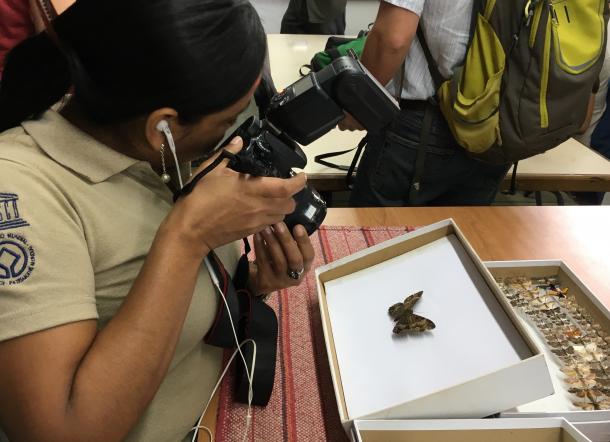 Parataxonomist Hazel Cambronero photographing a moth as part of the database inventorying and curation of each species that comes through the central BioLep laboratory before being pinned and hand carried to a formal collection inside or outside of Costa Rica. 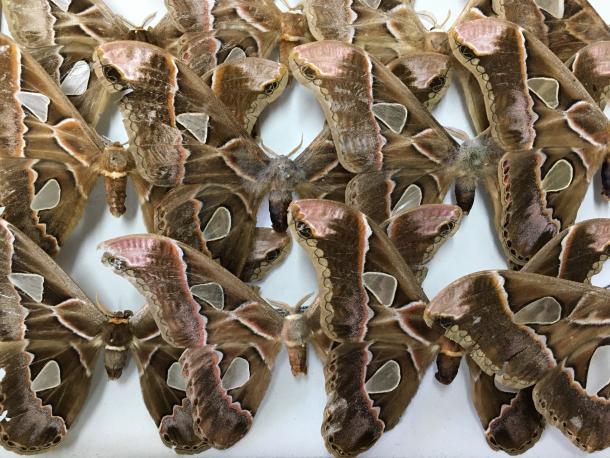 How Exactly Does DNA Barcoding Work?

We'd like to give you a visual tour of what happens with species discovery in ACG. 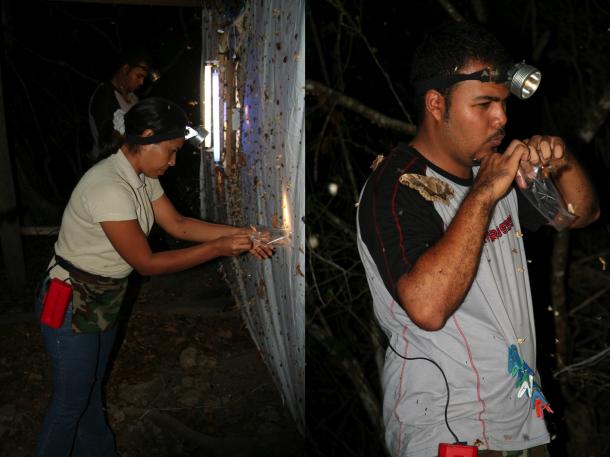 1. Parataxonomists Hazel Cambronero and Sergio Rios collect specimens in the forest, not knowing what every one is but generally leaving behind those that they feel they already understand.

The ACG focus, which GDFCF supports in full force, is on finding all species of moths and butterflies (Lepidoptera), their parasites, and their food plants, for all of its terrestrial 1,200 km2.  The Lepidoptera may be winged adults, as above at a car battery-powered light trap, or wild caterpillars from the plants they are feeding on in the forest, to be reared in captivity to see what species they are.  This means find it, know who it is, know where it lives and what it eats, and document all that on the web. Roughly 11,500 species of moths and butterflies have been found out of an estimated 15,000 species, across the three forest ecosystems of ACG, along with 3,500+ species of parasites and 2,500+ species of food plants. 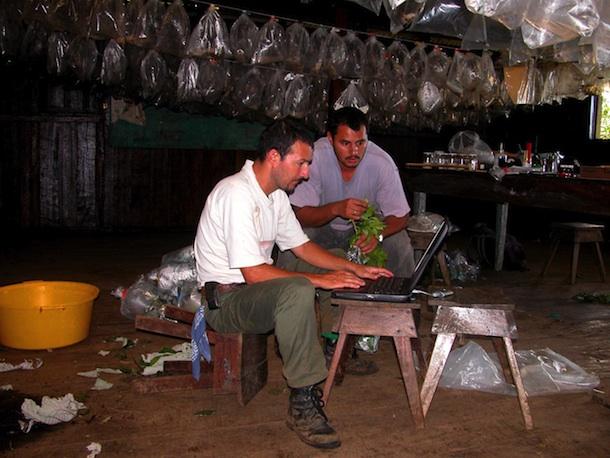 2. The wild-caught caterpillars are reared in bags with their food plants in rearing barns at 11 GDFCF-ACG research stations throughout the three major ACG ecosystems – rain forest, dry forest, cloud forest.

All documentation, including entering data into the database, identifying and if necessary saving a specimen of the food plant as a voucher, and photographs of the caterpillars, is done on-site by the parataxonomists – as you see here by Freddy Quesada and Harry Ramirez. What emerges from the pupae in the rearing bags is a moth or butterfly, or a parasitic fly or wasp that burrowed into the caterpillar before it was captured.

3. The newly light-trapped, or the newly emergent moths, butterflies and parasitoids are screened, photographed, and sometimes museum-prepared by their parataxonomists – as you see here – Ruth Franco and Sergio Ríos.

The initial identifications of caterpillars or winged adults are bestowed in the field, and then are checked against the existing inventory database. The parataxonomists' decades of inventory has made them local experts on many kinds of species of Lepidoptera, parasites and food plants. But they, like many others in the world of formal academic taxonomy, have long been fooled by the look-alikes. DNA barcoding has revealed to them a whole new layer of biodiversity hiding under what we thought we knew, as well as allowing accurate identification among thousands of species that can be distinguished by eye, but hide among the sheer numbers (see figure 4 below).

4. During this process, Sergio Ríos takes one leg to be DNA barcoded.

ACG has generated the largest collection of 5-legged insects in the world. The leg collected from the moths goes into a robot-friendly lysis plate with 94 companions, and is couriered to the Biodiversity Institute of Ontario at the University of Guelph for DNA extraction, sequencing, and the DNA barcode – a tiny snippet of DNA – is recorded into the BOLD public database. 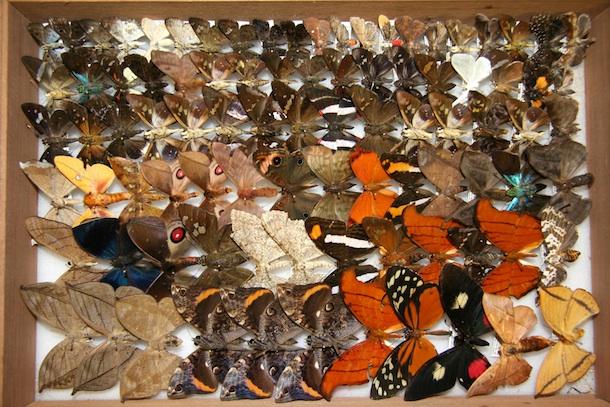 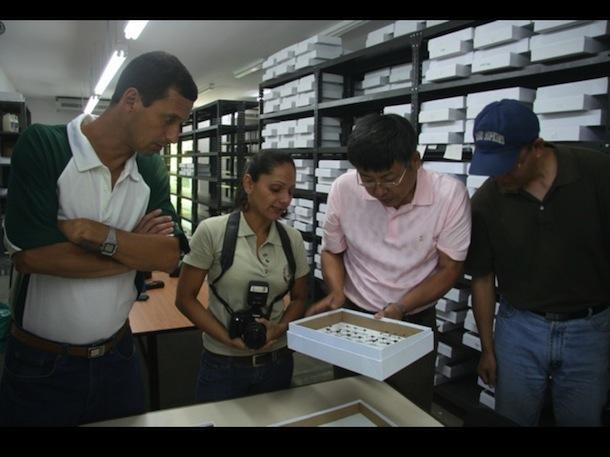 5. A BioLep parataxonomist, Ruth Franco, explains the entire process to visitors from the Universidad de Costa Rica, and from China.

Once field-identified and field-databased, the samples are held in freezers at the research stations and then transferred to the ACG-GDFCF BioLep laboratory in the Estación Biológica Santa Rosa in ACG’s Sector Santa Rosa. Here the specimens are further processed, labeled, and a decision made as to whether to destructively/sample/destroy, or DNA barcode and deposit in Costa Rica's Museo Nacional, the National Museum of Natural History at the Smithsonian Institution in Washington D.C., USA, the Canadian National Collection in Ottawa, Canada, or elsewhere among the world’s scientific repositories.

6. Two newly discovered species of parasitic wasps, each is about 2 mm long and discovered by its DNA barcode.

The DNA barcode is the only really certain way to distinguish this pair of wasps from each other and from the hundreds of other newly described species of nearly identical ACG wasps. Reared from an elevational pair of nearly identical butterfly caterpillars, Apanteles ruthfrancoae (left) lives on the lower slopes of Volcan Cacao in the center of ACG, and Apanteles duniagarciae (right) lives slightly higher on the same volcano. Both bear the names of the parataxonomists that work with them. 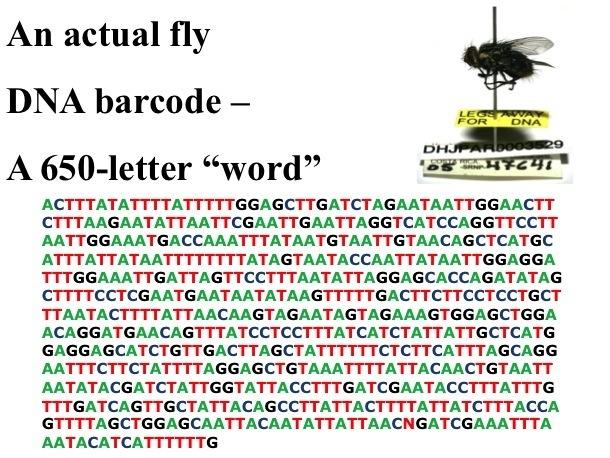 7. A DNA barcode is generated for a particular specimen and it looks like this (above).

The newly generated barcode is added to the growing "Libary of Life" barcoding public database, BOLD, at the International Barcode of Life (iBOL), established to catalog planetary biodiversity. As of 2020, the set of barcodes generated by more than 1,485,000 ACG specimens (47,752 species) found and documented by the GDFCF/ACG parataxonomists is the largest tropical dataset among the more than eleven million barcode records in BOLD that contain 686,000 species. From Costa Rica overall, there are 57,000 species in BOLD (1,605,000 records). And for that species of fly we now have its license plate and can then connect any member of that species to any other information that humanity has about any other barcoded member of that species, IF you can read its barcode. We eagerly await the day when we all have in our back pocket something the cost and size of a plastic comb that will make the WiFi connection from anywhere, any time, by any one. This will be crowdsourcing of biodiversity by 7 billion-plus people.

By teaming with iBOL, the ACG-GDFCF team of 38 parataxonomists and their several dozen international collaborating taxonomists has mainstreamed the use of DNA barcoding to ensure precise identification and discovery of the literally tens of thousands of species being found by the parataxonomists in the ACG forests – as many as occur in North America, packed into an area the size of Philadelphia and its suburbs. Combining their 365/31/7 inventory intensity with the speed and accuracy of DNA barcoding, and integrating with classical taxonomy, literally opens tropical nature’s book of life: from pinpointing ecological relationships, accurating identifying biocontrol agents and sources of new chemicals and medicines, to identifying climate adaptation responses and conflicts, to fine-tuning resource management techniques, and perhaps most important of all, to allowing all of us the mental stimulation of the variety of life. Bioliteracy builds with knowledge, and this is especially for residents who become experts on their natural heritage and advocates for its survival. Years of practice have proven the effectiveness of this model. The task remains large in ACG even while this approach needs to be mainstreamed to the rest of the tropics. The growing use of DNA barcoding technology as a standard and personal taxonomic tool has proven that we can know the world’s biodiversity and we can share this knowledge with the entire world in a cost-effective way. The inventors will give us the backpocket barcorder, and global WiFi will give us billions of crowdsourcings to fill the library of life.