A History of How ACG Came to Be ACG 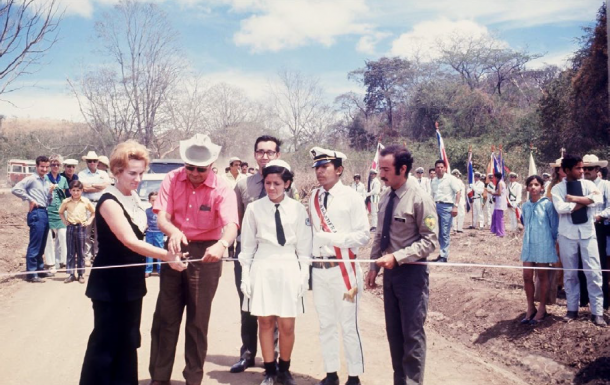 Inauguration of Parque Nacional Santa Rosa in 1971. Alvaro Ugalde is in the national park uniform, Mario Boza is in glasses and national park uniform; Karen Olson de Figueres (the First Lady to President "Pepe" Figures) is in the black pantsuit, and Fernando Batalla, the Minister of Agriculture, is in the pink shirt. In white are two students from the Guanacaste Institute. (photo by Steve Cornelius)

In the latest issue of the journal BioTropica, Drs. Dan Janzen and Winnie Hallwachs have penned an excellent history of Área de Conservación Guanacaste (ACG), “Área de Conservación Guanacaste, Northwestern Costa Rica: Converting a Tropical National Park to Conservation via Biodevelopment.” The article covers the early years of Parque Nacional Santa Rosa, under its first director, Alvaro Ugalde, when it was 30,000 hectares, to the “Janzen and Hallwachs Invasion, Interference and Meddling” (their words), to the present day, where it stands at 169,000 hectares. In the conclusion, they write: “To convert Parque Nacional Santa Rosa into ACG while embedded in a low-density democratic society, on poor soils, and far from central political forces and desires in 1985, was, and still is, low-hanging fruit. What parts and processes of its experiences can be valuable tools in creating and restoring similar wild areas that are allowed to survive into perpetuity in other parts of the tropics depends on the specific traits of the other parts. There is no shirt that fits all, but there is the concept of a shirt – sleeves, fabric, pockets, style, buttons, sizes and colors. And the shirt has to be desired by its wearer(s). Human social desire is the single most needed trait for allowing survival of wild tropical biodiversity.” The full article can be viewed here.