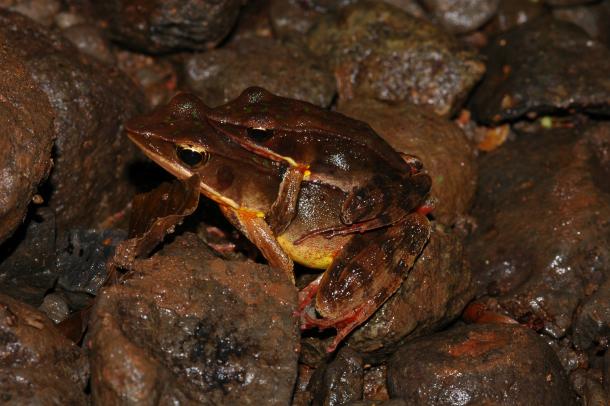 A frog with multiple identities may be lurking about Area de Conservación Guanacaste. Dr. Robert Puschendorf, an herpetologist at the University of Plymouth, United Kingdom, who is also a technical advisor for GDFCF, last week published a new paper, “Cryptic Diversity in Lithobates warszewitschii,” in the journal ZooKeys. In the paper, Puschendorf and his colleagues suggest that a common species of true frog, Warszewitsch’s frog, may, in fact, be a group of “cryptic” species. In other words, there could be multiple species of frogs masquerading under the name Warszewitsch’s. The team used DNA barcoding to analyze specimens from three different geographic areas within Costa Rica (including ACG) and Panama and found enough genetic variation among the samples to suggest cryptic species are indeed present. The next step, according to conservation biologist and lead author James Cryer, also at the University of Plymouth, will be to gather more samples throughout the full range of the species. Overall, he added, findings such as these are important to help improve our understanding of amphibian biodiversity. "If indeed there are multiple species, it may be that they have different ecological requirements, and therefore different approaches to their conservation are needed." Cryer says. "This study further reinforces the power of DNA barcoding for rapid, preliminary species identification. Especially in the tropics, where habitat loss, climate change and infectious disease continually threaten many undescribed amphibian species."

Another paper, published this week in the journal Animal Conservation, also by Dr. Puschendorf, along with corresponding authors Drs. Dan Janzen and Winnie Hallwachs, President and Vice President of GDFCF, and María Marta Chavarría Díaz, with ACG’s Programa de Investigación, focuses on Craugastor ranoides, a critically endangered species of frog, which has declined and disappeared from high-elevation sites across its range, and has only persisted in the lowland dry forest of ACG. Its extirpation from cloud forest sites is believed to be due to climate change and emerging diseases, particularly the amphibian chytrid fungus (Batrachochytrium dendrobatidis), which thrives in moist, montane habitats. During their research, the team documented cryptic diversity – meaning populations that have diverged at a genetic level, but, so far, no diverging morphological trait could be detected – within this endangered species. The team also documented C. ranoides at all sites where it had previously been observed post-decline and recorded its presence at a new location. Overall, the team’s research, the authors write, “provides optimism that similar dry forest ever ﬂowing stream habitats may harbour undiscovered populations of the species-complex C. ranoides, that ranavirus may not always be pathogenic, and that frog reintroductions are potentially viable.” 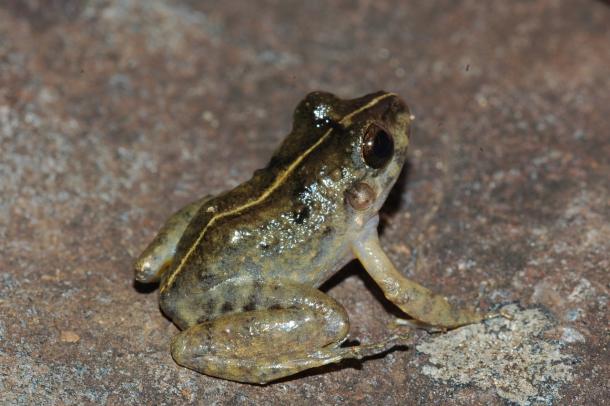