In late February, GDFCF closed on the purchase of a unique tract of primary forest, adding 70 hectares (173 acres) to Area de Conservación Guanacaste’s approximately 169,000 hectares. The Finca Auxiliadora property is particularly valuable because it sits at the intersection of Costa Rican dry forest and rain forest; these “mixing zones” have been found to be very rich biologically and contain many undescribed species of insects, as well as species restricted just to this ecotone. The new parcel contains many amazing plant species, including one, Parmentiera valerioi, which is Red Listed by the IUCN as endangered. In addition, the forest contains a spectacular and strange species of aroid that has never before been seen in ACG. Spider monkeys, yet another Central America endangered species, live here as well. Primary forests, such as those found in Finca Auxiliadora, are also enormously valuable in terms of carbon sequestered per hectare – in this case, the carbon stored in this forest is roughly equivalent to the yearly CO2 emissions of 19,000 cars!  This new land acquisition would not have been possible without the hard work of Sigifredo Marin, GDFCF project manager, and Alejandro Marin, apprentice to the project manager, in negotiating our purchase of this property. 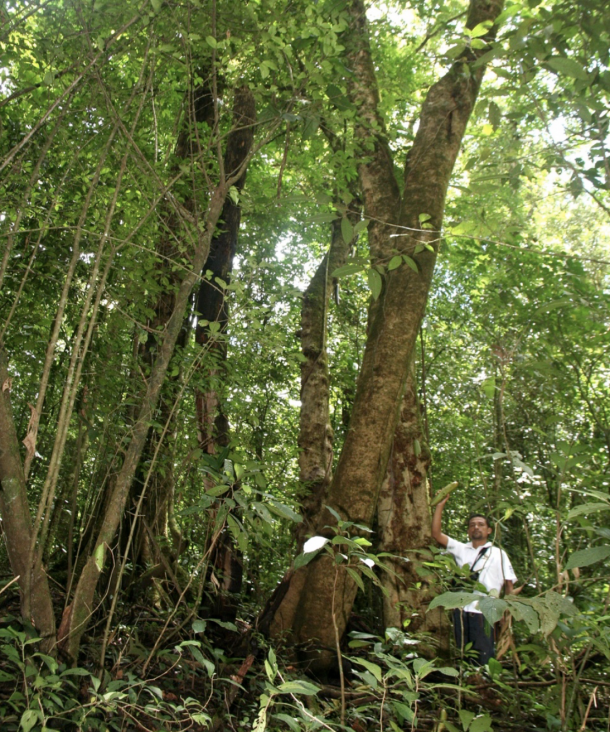 The tree trunk touching the elbow of parataxonomist Adrian Guadamuz is the endangered Parmentiera valerioi; he is holding its fruit in his hand (photo by Dan Janzen)