Where Have All the Insects Gone? 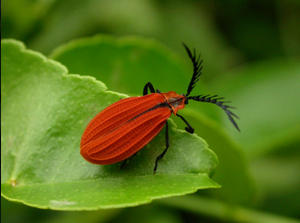 In a recent article, “Where Might Be Many Tropical Insects?”, in the journal Biological Conservation, GDFCF President and Vice President, Drs. Dan Janzen and Winnie Hallwachs, describe their observation of insect decline in the tropics, writing: “In this decade, some of our extra-tropical entomological colleagues have published very real observations that insects are declining in abundance. We have been telling the same to largely tropical ecology classes in the University of Pennsylvania for at least three decades if not longer. Our observations are based on informal comparison of today with my 1950's youth in Minnesota and Mexico, and with an entomological and conservation research career in Costa Rica since 1963, and Winnie the same since 1978.” For decades, say Dan and Winnie, they lived in the middle of a “once-seething insect community” in Area de Conservación Guanacaste. It used to be, they write, that they would have to set up a large tent in their living room if they wanted to work at night amongst the hoard of beetles and moths attracted to the lights. But by the early 1990s, that need faded away, despite the fact that they were located in the midst of a huge tropical dry forest, cloud forest and rain forest that was busy restoring itself. In this perspective, Dan and Winnie write that multiple factors have led to this decline, including grand-scale removal of old-growth and secondary forests, the widespread use of pesticides and herbicides, fragmentation, and climate change.

So, what happened to the plethora of insects? Some disappear from that particular ecosystem, others go extinct, while some become more abundant. Others become rare but are still present, some move to another ecosystem, some adjust to the new parameters, and others invade “new” ecosystems. And what can we do about it? Dan and Winnie write: “Conserve and restore very large and habitat-diverse and ecosystem-diverse wild areas; at least give the beasts the chance to search out more habitable habitats and ecosystems, when they will or can. Strongly protect old-growth forests and those that are becoming so. These measures slow the impact of climate change and hold a wide genomic range for the possible survivors. Establish baselines against which to measure future changes, their sites and their biological traits, and continue the monitoring for decades; use that information to plan longer term strategies of mitigation and amelioration. Facilitate the emergence of bioliterate tropical societies that will favor individual actions, actions for which wild biodiversity survival raises the cultural and genomic ﬁtness of tropical individuals and institutions. ACG has been trying this for 38 years. It is a rough road but it does function.” The full article can be accessed here.