Porcupines, Moth Legs, and a Drive to Conserve What Is Slipping Away 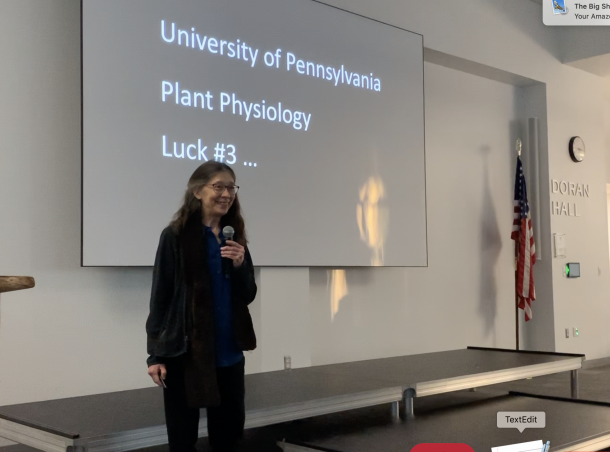 Dr. Winnie Hallwachs discusses how she came to be a tropical biologist (photo by Monique Gilbert).

On December 7, GDFCF Vice President Winnie Hallwachs spoke at one of her former schools, Springside Chestnut Hill Academy in Philadelphia, Pennsylvania, to discuss her life’s work as a tropical ecologist and evolutionary biologist. Attended by more than 100 people, the lecture was a rare opportunity to hear Winnie speak about how she came to study agoutis, how she met Dan, and how their life’s work evolved to focus on biodiversity conservation. Winnie had several heartfelt messages for the students who attended the lecture. Noting that one reason she and Dan were able to accomplish so much in Costa Rica was because Dan didn’t know that what they were trying to do was impossible, she said, “So, to those of you who are young, please, hold onto your idealism. Please. Don’t let people say things are not possible. Because, in this case it worked.” She also spoke about climate change and its impact on ACG, saying, “This is a tremendously disruptive time. The reports that are coming out about the disappearance of biodiversity are true. The reports about climate change are true. We have lived it.” Winnie also discussed the tradeoff between climate-damaging air travel and the importance of tourist visitations that keep major national parks and protected areas in the tropics viable. “If tourists stop going to places like Costa Rica,” she says, “society will just let it go.” We are grateful to GDFCF board member Jessie Hill, who conceived of the event and hosted it at the school with her organizing committee of Karen Baldwin, Tanya Dapkey and Sandra Berrios-Torres. If you were unable to attend the lecture but would like to donate to GDFCF in honor of Winnie and her work, please click here.

GDFCF Board Member Jessie Hill speaks of her long friendship with Winnie (photo by Dan Janzen).