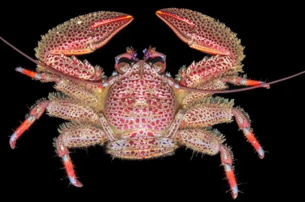 One of the new records for Costa Rica, Petrolisthes donadio (photo by R. Vargas and J. Cortés)

The BioMar project, which is a collaboration between Área de Conservación Guanacaste (ACG), GDFCF and the Centro de Investigación Ciencias del Mar y Limnología at the University of Costa Rica (CIMAR), seeks to inventory and develop baseline knowledge of marine biodiversity within the greater marine sector of ACG. In November, Dr. Rita Vargas-Castillo, the collection manager and curator of crustaceans at the Museo de Zoología at the University of Costa Rica, and Dr. Jorge Cortés Nuñez, the director of CIMAR and a BioMar project leader, published a paper, “New Records of Marine Decapods and Stomatopods in Área de Conservación Guanacaste (ACG): Four Years of Marine Biodiversity Inventorying,” in the journal Marine Biodiversity Records. In the article, Vargas and Cortés detail the findings of the inventory thus far, with respect to decapods (the order of crustaceans containing shrimp, crabs, crayfish and lobsters) and stomatopods (mantis shrimp). After four years of the project, 2,650 specimens of marine decapod crustaceans and stomatopods were collected, belonging to 209 species, out of which 99 are new records for ACG, four may be new species, and nine are new records for Costa Rica. “The high concentration of species in ACG may be attributed to the diversity of habitats, the seasonal upwelling and the recent sampling efforts,” the authors write. “In only four years, the BioMar-ACG has increased the number of species in these groups of crustaceans [decapods and stomatopods] by 37% over the past 85 years of previous studies in the ACG.”