Let's Be Kind to the Survivors 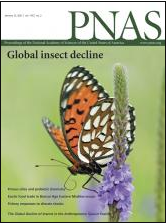 In a new paper, “To us insectometers, it is clear that insect decline in our Costa Rica tropics is real, so let’s be kind to the survivors,” in the journal Proceedings of the National Academy of Sciences, Drs. Dan Janzen and Winnie Hallwachs write that as human biomonitors, they have seen the decline in insect species richness and diversity in Área de Conservación Guanacaste since the late 1970s and more intensely since about 2005. The overarching perturbation, they say, is climate change. They note that we all have been impacted by climate change, every one of us, everywhere. And how should they, as members of the global scientific guild, react to the decline in ACG insect species and abundance, and to the same affecting tropical insect faunas elsewhere in Costa Rica and the tropical world? They write: “A central path for wildland survival, largely ignored so far, is to facilitate human tropical societies to welcome biologically viable large tropical wild ecosystems as full members at their negotiating table, from locally to internationally. For tropical societies to begin down this path, be they local and small, full countries, or even multicountry collages, they need to know in ever-increasing detail what is in, and what are, their wild ecosystems.” We can create a “bioliterate” society in the same way a literate society is created, they say. With the tool of DNA barcoding, we can bring bioliteracy of the wild to all societies. The BioAlfa project is an attempt to do just that. The next step, write Dan and Winnie, as climate change descends upon ACG, is to “Be kind to the survivors by stimulating and facilitating their owner societies to value them as legitimate members of a green sustainable nation. Encourage national bioliteracy, BioAlfa.” The full article can be found here, and the entire PNAS issue, with 13 articles on Global Insect Decline, is here.