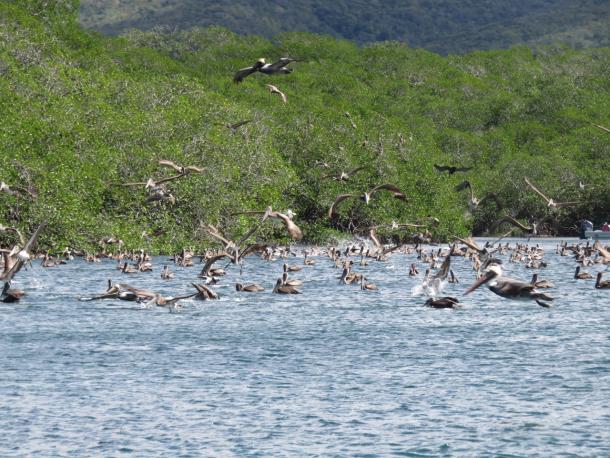 A flock of Brown Pelicans feeding at the south end of Bahía Santa Elena with coastal mangrove forests and the ridgeline of Cerros Santa Elena (all within ACG) in the background (Photo by Eric Palola).

Bahía Santa Elena (Santa Elena Bay), which borders the Área de Conservación Guanacaste, was recently designated a Marine Management Area.  Such a designation means the bay will be reserved for specific purposes, including the conservation of marine life, the fostering of recreation and tourism, and the sustainable use of its resources, including fishing. The 732-hectare bay, with its completely undeveloped shoreline, is a breeding area for several marine species, including dolphins, whales, and turtles, as well as the endangered whale shark and several species of rays.

Increasing coastal alteration and overfishing have threatened the bay, but this designation, with its participatory management and conservation, should aid in its protection. According to Alejandro Masís Cuevilla, Director of ACG, the designation helps Costa Rica reach its goal of increasing, by 2020, the protection of its coastal marine ecosystems. Added Edgar Gutiérrez, the former Minister of Environment and Energy, “This marks a milestone in the way in which communities can work together to establish a sustainable model for the management of marine-coastal resources, since in this way the fishermen of the area will not only commercially extract species, but will also have the resources and training to be able to take care of the area and promote the development of the region without compromising long-term resources.” The designation process involved the entire community, with the artisanal fishing, sport fishing, longline fishing, and tourism sectors all involved, alongside town officials, government agencies, and nongovernmental organizations.

Following the discussion process, the neighbors of the bay requested the creation of a Marine Management Area. Estela Aleman, a community leader and representative of the Local Council of the MMA Santa Elena Bay, said, "At first the idea was not accepted by the neighbors, because they believed that fishing activities would be restricted. But we called all the fishermen - 300 arrived - and in that meeting we explained what the proposal of the Marine Management Area was about, and then they accepted the initiative.” GDFCF collaborates and helps support two marine projects that utilize Bahia Santa Elena and ACG marine parataxonomists supported by GDFCF live in the neighboring village of Cuajiniquil.  The full story (in Spanish) on this new designation can be found on the ACG website: https://www.acguanacaste.ac.cr/noticias/noticias-acg/4185-firma-del-decreto-de-la-creacion-del-area-marina-de-manejo-bahia-santa-elena.