A Special Visit from Carlos Manuel Rodriguez, Minister of Environment and Energy 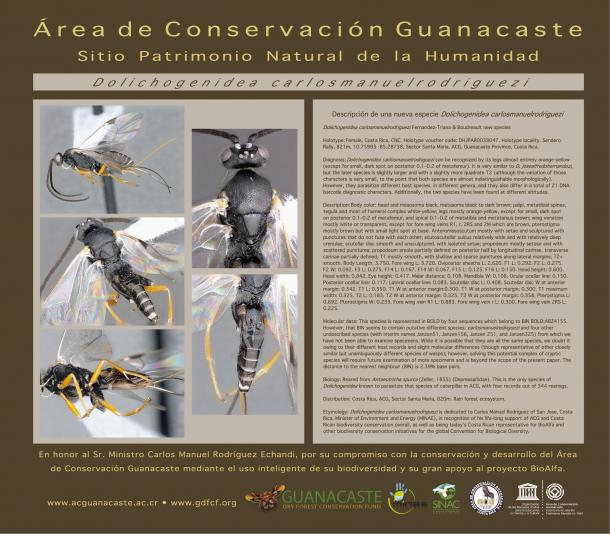 GDFCF and ACG presented Minister Rodriguez with this plaque, showing a new species named in his honor, for his "commitment to the conservation and development of ACG through the intelligent use of its biodiversity and his great support for the BiofAlfa project."

On January 25, GDFCF board members and staff, meeting in Sector Santa Rosa, were thrilled and appreciative to have Carlos Manuel Rodriguez, the Costa Rica Minister of Environment and Energy, speak to us about his conservation vision for Costa Rica. His said his job is “…to think about what 2030 should look like,” adding, “[the world] is more intent on destroying nature than protecting it. Nature provides trillions of dollars of economic benefit to the world, yet we invest only 0.007% of global GDP in protecting it.”  For most countries, nature conservation, he added, “…is a hobby.”

Minister Rodriguez continued by emphasizing that Costa Rica needs to continue to move toward its new economic paradigm – a green one, which includes nature’s benefits and costs. Rodriguez said he is very excited about the future of Costa Rica (even though he is sometimes frustrated the country is not where he thinks it should be by now). Costa Rica, he said, has a new, young president who understands environmental issues. The biggest environmental challenge facing the country, he noted, is that over the last 20 years, Costa Rica has gone from a rural-based society to an urban-based society. The ministry was designed to deal with environmental issues in rural areas, but now it has to switch to addressing urban environmental ones.

Rodriguez praised the work of GDFCF, saying that Costa Rica “would be flying at the speed of light if we had supporting groups like GDFCF in other areas.” What GDFCF has done in the last number of years – adding land to ACG and doing science – has been great, he continued, saying that GDFCF and ACG have taught the government about restoration and the impact of human activities, particularly as it relates to climate change.  He emphasized that “GDFCF and ACG have a great story to tell and we need to bring this story to the world.”