We’ve had another busy year at GDFCF in our mission to support complex biodiversity survival in the wildlands of Area de Conservacion Guanacaste (ACG) and collaborate with our friends and colleagues in Costa Rica who work to make ACG an international model of biodiversity conservation. We are pleased to share these highlights from 2015.

Launch of “BioMar”: the biodiversity inventory of Sector Marino 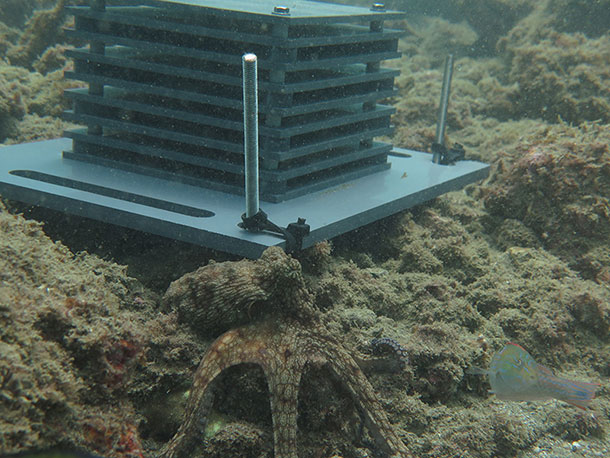 Our diverse team includes ACG staff, CIMAR (the marine research arm of the Universidad de Costa Rica), the Smithsonian (Tennenbaum Marine Observatories Network, TMON), and our two new marine parataxonomists Yelba Vega and Gilberth Ampie from the fishing village Cuajiniquil on our northern boundary. They and their DNA barcoding are supported by the Wege Foundation and Wallace Genetic Fund. In July we hosted the TMON team from the Smithsonian to spend four days on the water with us, nailing to the ocean floor 9 ARMS (Autonomous Reef Monitoring System), empty multi-layered boxes that mimic the structural surfaces and complexity of a coral reef, and therefore attract colonizing invertebrates – to be captured in their entirety after a year of being colonized. Our colleagues Professors Jorge Cortes Nunez and Rita Varga from CIMAR are providing critical leadership and mentoring for Yelba and Gilberth to document who lives in the 100,000 acre no-take Sector Marino. Crabs, which are sort of  “the butterflies of the sea”, are their first target because Rita is a Crustacean specialist and there are many, many species of them, big and small. (Read more.) 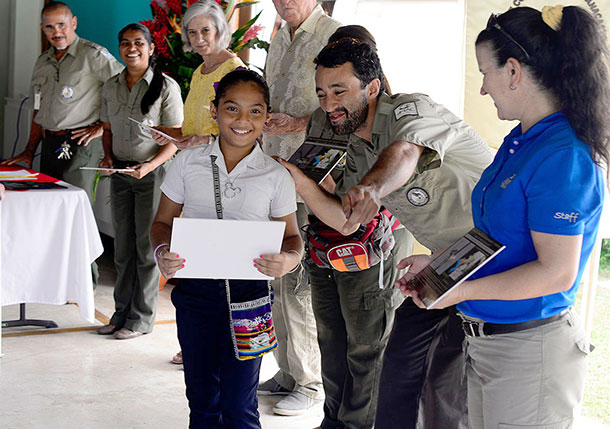 From the Tico Times by Robin Kazmier: "Twenty Costa Rican schoolchildren drew their way into the (natural) history books this year and became the first kids in Costa Rica — and probably anywhere — to have wasp species named in their honor. The students, who are 4th, 5th and 6th graders from a handful of small communities in the northwestern province of Guanacaste, were the winners of a drawing contest called Comparto mi nombre con una especie (I share my name with a species). At a heartwarming ceremony on Dec. 4, each student received a plaque bearing their species’ name, photo and a description along with a map showing where in the Área de Conservación Guanacaste (Guanacaste Conservation Area, ACG) it was first collected [by ACG parataxonomists].” (Read more.)

GDFCF Board President and ACG Technical Advisor Dan Janzen has been visible in this year of articles leading up to the just concluded Paris climate summit. A prominent piece in the April 6 New Yorker by Jonathan Franzen titled “Carbon Capture” drilled into the sensitive question of whether opportunities for biodiversity protection “here and now” are being eclipsed by the emphasis on climate change. Dan, Winnie and all of our work for ACG are profiled as an example of what can be done. While the article naturally spawned a vigorous debate about the premises of Franzen’s article, none of the arrows were aimed at ACG or GDFCF. (Read more.) Recently Dan was featured in an article with Australian Bill Laurance on the painful impact of climate change on tropical forests. 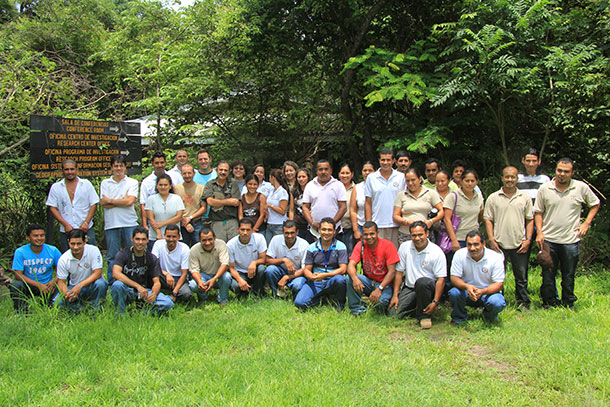 Our amazing team of 36 ACG rural parataxonomists working across 12 remote research stations + 5 part time curators in the National Biodiversity Inventory or INBio (which was transferred to the Museo Nacional de Costa Rica in 2015) continue to collect and identify roughly 6,000 species of moths, butterflies and parasitic insects, of which approximately 300 are newly described by us, with another 300 being described by taxonomists from around the world. 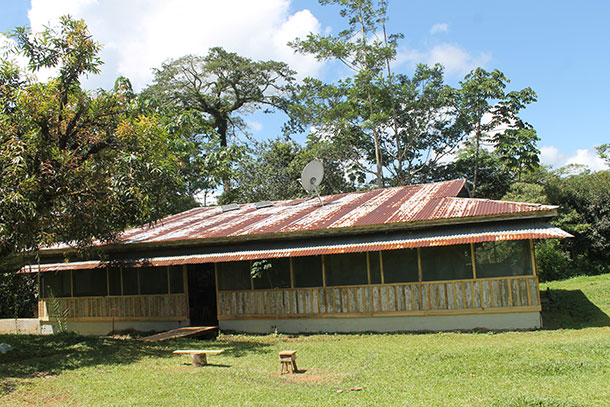 Our in-country Costa Rican project manager, Sigifredo Marin, has supervised and coordinated a series of much needed improvements to four biological research stations in GDFCF’s Sector Rincon Rain Forest, a sector that is co-managed with ACG. The stations are on the mid-elevation wet rain forest Carribbean side of ACG: the just acquired old farmhouse that has become Estacion Wege, as well as existing Estaciones Leiva, Caribe and Botarrama. We are grateful to our funding through the Fundacion Neotropica in San Jose, and land purchase by the U.S. Tropical Forest Conservation Act, for these improvements in areas of high tropical biodiversity. 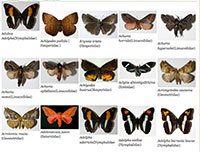 We are grateful to the JRS Biodiversity Foundation for supporting Luz Maria Romero’s guidance to the ACG parataxonomist team to produce big results in bioinfomatics: species identification, database management, and photo archiving. A special outcome is the creation of “Species Pages,” (Paginas de Especies) an on-line field guide showing the complex variety of life in ACG along with their natural history (habitat, food plants and life cycles). The Species Pages, all authored by the parataxonomists, are nested in the formal ACG website. The team has produced 352 individual species pages to date, encompassing 21 different families of insects. Fifteen pages from seven different plant families have also been published as well as several about mammals. And another 28 pages are currently in process. 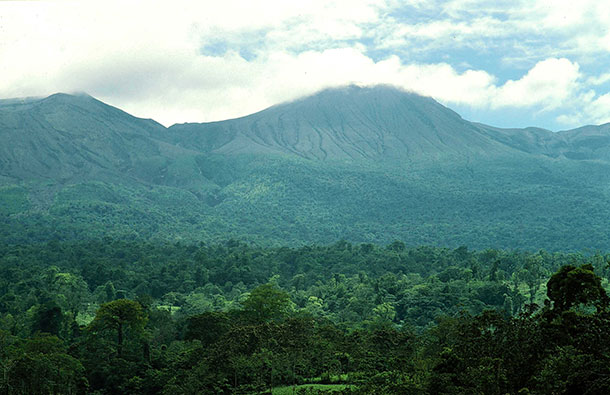 While the emphasis for GDFCF and ACG has shifted from simple land purchase to land management, biodevelopment, and social integration with wildlands, we still buy land when strategically key parcels become available and we have the cash. We were fortunate this year to purchase three parcels of land totaling 365 acres for addition to Sector Rincon Rainforest (SRRF), bringing the overall size of contiguous forest in SRRF to over 22,000 acres. Moreover, it has become apparent with the climate-change fueled El Niños and overall drying of the ACG forests, that the ACG east-side wet Caribbean rain forests will be needed even more as refugia for animals and insects. Land purchase was made possible by the U.S. Tropical Forest Conservation Act, individual key donors, and the Swedish Children’s Rainforest, the German Children’s Rainforest, and the Wege Foundation. 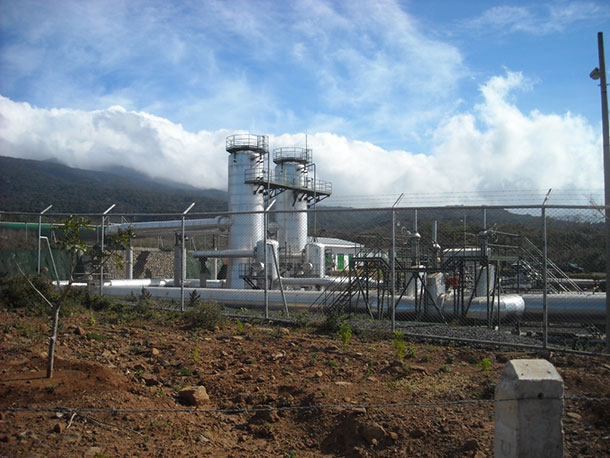 ACG and GDFCF continue to provide pro bono biomonitoring of the new Pailas Dos geothermal development being carried out by ICE (the National Electric Company) on the southern boundary of Sector Pailas and Sector Santa Maria; stay tuned for major developments here in 2016, when we hope to begin the DNA barcoding analysis of the biomonitoring samples collected with Malaise traps loaned by the Biodiversity Institute of Ontario (BIO) at the University of Guelph.   When carefully designed and monitored, geothermal energy can be an important contribution to meeting Costa Rica’s national carbon neutrality goal. With thanks to the Wege Foundation, the Canadian government and BIO, all of the DNA barcoding conducted for this project and others is made possible. 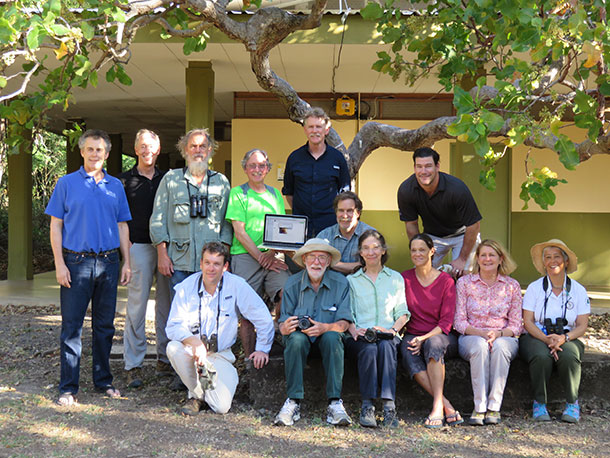 The GDFCF Board of Directors and Advisors gathered in Sector Santa Rosa, February, 2015 (along with Anne Lambert via Skype!)

As you know, our organizational structure is minimal so that 95% of our resources are used in the field to support the biodiversity science, education, land conservation, and operational needs of our programs and people working in ACG. Our work is an internationally recognized beacon of innovation in tropical biodiversity restoration and non-damaging biodevelopment; rooted in the early vision of Dan and Winnie and our Costa Rican colleagues, now expanded by the experience of our Board and Advisors, and made possible by the generosity of a variety of institutional, individual, and governmental supporters.

Thank you for reading and for all your support.