New Research on Jaguar Predation of Sea Turtles in ACG 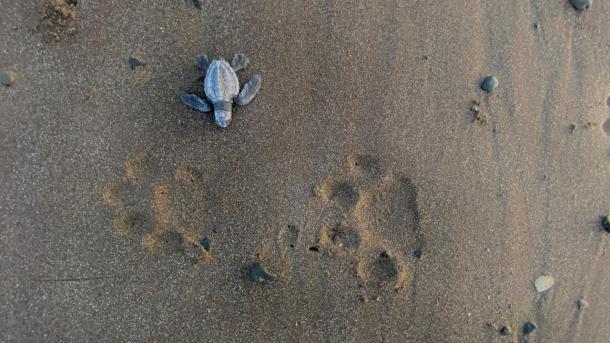 A baby Olive Ridley sea turtle, heading for the Pacific, is about to cross the footprints of a jaguar. Photo by Luis Fonseca.

A paper released late last year in the journal Herpetological Conservation and Biology found that jaguar (Panthera onca) predation on nesting sea turtles at Playa Nancite in Área de Conservación Guanacaste does not represent a significant threat to the Olive Ridley turtle (Lepidochelys Olivacea) population. The article, “Impacts of Jaguar Predation on Nesting Sea Turtles at Nancite Beach, Santa Rosa National Park, Costa Rica,” is by Luis Fonseca, who heads up the ACG/GDFCF sea turtle research project, and his colleagues. For the research, Fonseca et al. documented jaguar predation events between the 2009-2010 and 2018-2019 nesting seasons (except for the 2012-2103 and 2013-2014 seasons) and estimated the size of the local nesting populations for each sea turtle species. During the study period, 160 Olive Ridley and 11 Green (Chelonia mydas) turtles were eaten by jaguars, which corresponds with fewer than 1% of the Olive Ridley population, and 8-40% of Green turtles. Thus, jaguar predation does not represent a significant threat to Olive Ridleys, and likely does not constitute a threat to Green sea turtles on a regional scale. The predation of Green turtles at Playa Nancite, could, however, influence the persistence of the nesting population at Playa Nancite, if the predation rates continue over time. Fonseca et al. also note that the Olive Ridley nesting population at Playa Nancite has decreased by approximately 59% from 1971-2017. The main factors contributing to this decline, according to the authors, is low hatching success in the years when the arribadas (mass nesting events) exceeded 100,000 nests, as well as incidental capture of both juveniles and adults in fishing gear. Previous research found that Costa Rica longline fisheries caught 699,600 Olive Ridleys between 1999 and 2010 in the Central American Pacific, a fishing area adjacent to Playa Nancite and other arribada beaches. Human consumption, pollution, climate change, and habitat loss are other factors that are contributing to the decline. The authors say it is important to continue long-term monitoring efforts where this predator-prey interaction occurs in order to help fill in important knowledge gaps with regard to the impacts of jaguars on sea turtle populations and the ecological factors that may trigger it. The full paper can be viewed here. 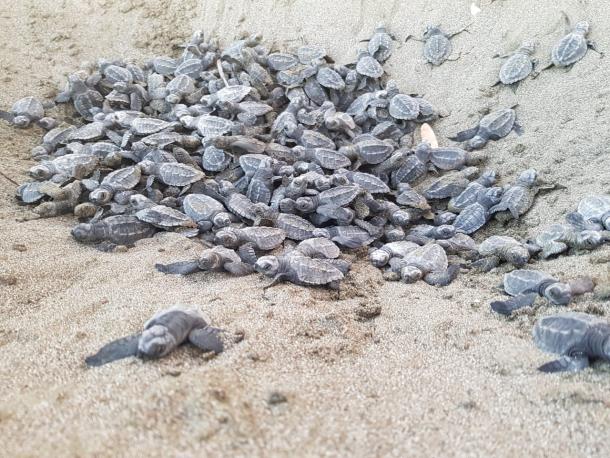