This is the only puma visit caught on the trail camera behind Dan and Winnie’s house in the Sector Santa Rosa administration area this year, in contrast to many puma photos and sightings last year both in the same place and within several kilometers.  (Photo 1)  The unprecedented drought in the 2015 rainy season greatly diminished the quantity of baby birds and young mammals, fruits, flowers, frogs and toads and insects.  This mountain lion came looking for water in an infrequently-filled bird bath, and perhaps to check the smells of animal activity.  Neither were rewarding. 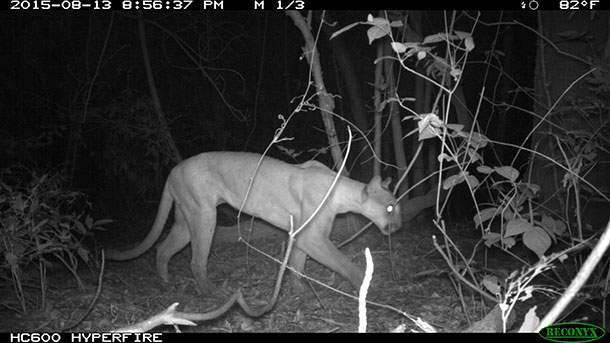 Equally, there were only a few coyote visits in 2015, including once this October after four harsh months of trivial rain and little food. (Photo 2) It was clear in the series of 6 trail camera photos, coming and going at some distance from the camera, that the coyote is very thin.  Overall, if you eat other animals, including insects, 2015 was a year of greatly reduced food and water availability, owing to the almost entire absence of animal reproduction during the first half of what should have been the rainy season (May-August), but was almost totally rain-free. 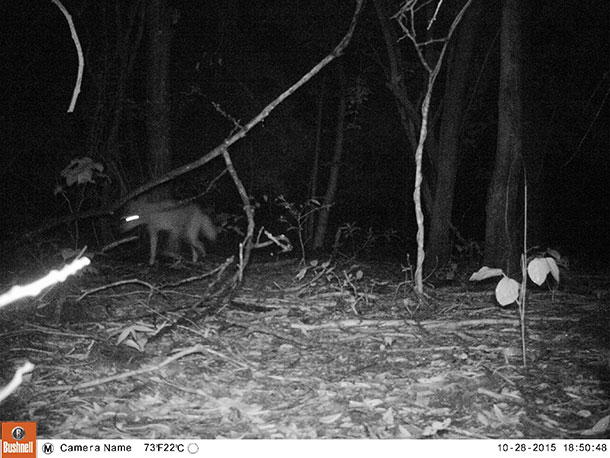 The evident vertebrate predators of 2015 were boas: large, medium, small and one huge; repeat visits by individual boas; and many known successful strikes, from fawn deer and adult agoutis to birds, and particularly doves.  (Our trail cameras are triggered by movement and animal warmth; boas move too slowly and are too close to the surrounding temperatures to set them off, so there are no trail cam photos of their activity;  in addition, boas use infrared wavelength perception to hunt warm animals, and seem to be bothered by the infrared beams of these and other cameras and usually leave.) Boas were found by people - usually with the help of mobbing birds or stomping agoutis - hidden near water sources or animal trails, in holes in trees, or in holes in the ground or vines.  (Photo 3) Unlike the pumas and coyotes, they can metabolically afford to wait months between meals, and their prey remained dependent on a few sources of water throughout most of the rainy season, instead of dispersing over large areas as they do in a normal year. 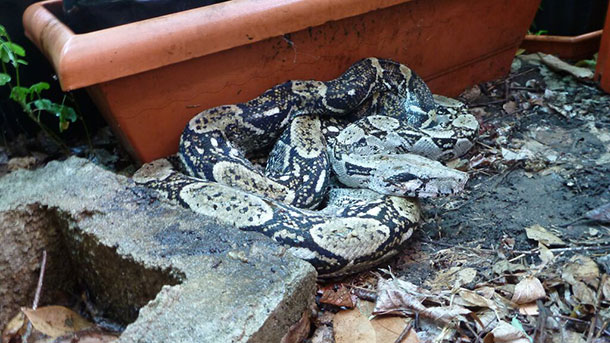