As 2017 draws to a close we want to share a brief update on our efforts to support the biodiversity survival of Area de Conservacion Guanacaste (ACG) and to thank you for your support. We always look forward to an opportunity to share highlights with you; at the same time, we will not constantly mail you for donations. For more regular news you can always “like” our Facebook page or view our website at www.gdfcf.org. There has been a flurry of activity this year with some important organizational changes described below.  With the help of many partner groups and people, and the daily efforts of our colleagues in ACG, we are doing large-landscape biodiversity conservation with the public-private mutualism of GDFCF’s role as a supporting NGO, and facilitating biodevelopment with neighboring communities – local, national and international.

Over the last few years, several renewable energy projects have been built next to the borders of the wind- and geothermal-rich area of the ACG, a natural tropical World Heritage Site. The National Electric Utility (ICE) and ACG/GDFCF have formed a collaboration, developed with the understanding that biological impact by monitoring should be a fundamental part of energy development infrastructure. Typically, this type of monitoring focuses on presence-absence of vertebrates but says nothing of their biological response to perturbations. Using insect traps, called Malaise Traps (a kind of flight interception trap), as a “biological thermometer or rain gauge” on linear transects around the new geothermal drilling sites, Dan Janzen and Winnie Hallwachs found that the biodiversity impact of these sites was the ecological equivalent to a several acre “landslide” in the forest. However, while the effect was ecologically isolated at the drilling site, this research also provided a strong baseline of biodiversity diversity by revealing many thousands of undescribed insects in ACG and its neighboring forest. This, in turn, was only possible by DNA barcoding the many tens of thousands of insects captured - the cost of which was supported by the Japan International Cooperation Agency (JICA). This research has led to the recognition that measuring and monitoring changes in insect biodiversity is a very robust way to understand the biological impact of an industrial development. We are grateful for the support from ICE, the federal government of Costa Rica (MINAE) and JICA.

Helping Kids Get into the Forest

GDFCF was proud to assist in raising funds for the purchase of a new school bus for the ACG children’s biological educational program, Programa Educacion Biologica (PEB), which annually serves over 2,000 elementary school kids from 50 schools around the perimeter of ACG. The PEB program is one of the longest running biological education programs for children in Central America, and has been copied in Honduras and Panama. Every day during the regular school year, the PEB bus goes to one of the neighboring rural schools, picks up a class of 4th, 5th, or 6th graders and their teacher, brings them to ACG for a day of biological projects in the forest with a PEB teacher, provides the kids lunch and supplies, and then returns the class to their home school in the late afternoon. With the help of the Wege Foundation, GDFCF was able to purchase the new bus and begin supporting a new PEB teacher, Yami Espinoza. Our thanks also to the Guanacaste Community Fund, Fundacion Parques Nacionales, PEB, Patricia Price Peterson Foundation, Hylton Enterprises, and the Exporpak company.

Recently, the coral research community’s attention has turned toward understanding which coral species and which locations are most resilient to climate change-fueled warm water events that lead to coral bleaching (expulsion or death of their mutualist algae) and eventually to coral death. Having baseline data about the extent and type of coral colonies ahead of such events is important for understanding the ability of coral reef systems to rebound and restore themselves. Many unanswered questions remain regarding the role(s) of coral diseases, parasites, and water chemistry in terms of coral bleaching and survivability. An intensive monitoring program of coral reef health has been started throughout ACG’s Sector Marino by GDFCF’s new Science Advisor and marine biologist, Caroline Palmer Puschendorf. ACG’s Sector Marino is unique because of the relatively large temperature swings experienced by corals due to an offshore upwelling current known as the “Costa Rican Dome.” ACG is also unique in that the offshore island archipelago (Isla Murcielagos and others) contains many different species of coral at different depths and exposures; some reefs are in protected coves while others face the open ocean. We are very grateful for the support of the National Geographic Society, the Rapid Response Facility of Flor and Fauna International, Jessie Hill, Giles Winstanley, Tejas Patel, and the other donors to Caroline’s Kickstarter campaign! (https://www.kickstarter.com/projects/586511594/save-coral-reefs-costa-rica-calling)

Drs. Caroline Palmer Puschendor and Carlos Jimenez gathering coral samples, and a view from the Isla Murcielagos  toward the wild mainland coastline of ACG. (photos by Christian Schmidt)

Winnie’s Presentation to the MesoAmerican Society for Biology and Conservation and Partners In Flight, Combined Congress, in San Jose

“Este congreso es suyo” (This Congress is yours) were the words from the podium immediately following a standing ovation for Winnie’s strong and heartwarming presentation to a packed room at the Partners in Flight and MesoAmerican Society for Biology and Conservation combined conference in San Jose on 1 November. For the first time, this conference had a strong women-in-science theme; Winnie was among the few women scientists invited to give a plenary talk. In her speech, Winnie discussed her long journey with Dan, the early course for female parataxonomists and their crucial and equal roles throughout the parataxonomist program, and reflections on working in a male oriented society. She characteristically gave a shout out to the other strong and influential women who have helped make ACG a success, such as: Maria Marta Chavarria, Luz Maria Romero, and long-time parataxonomists Petrona Rios and Elda Araya, among others. Following her presentation, a long line of young women scientists (and older ones too) gathered to have their picture taken with Winnie and share their respect and stories. We are working to have Winnie’s slide presentation archived and added to GDFCF’s website. 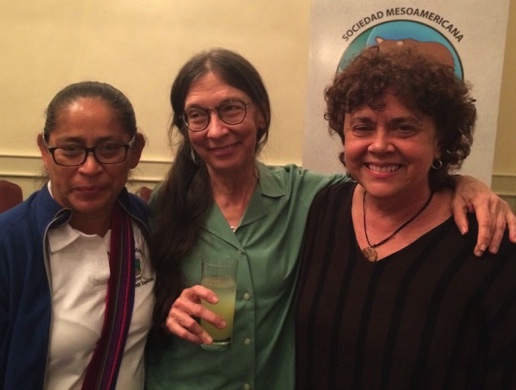 With new support in hand, we are ramping up a project to locate ACG’s migrating Wood Thrush and other species of concern, and continue to develop a food web analysis methodology using DNA barcoding of bird fecal samples. With collaboration from the Costa Rica Bird Observatories (http://costaricabird.org/), we have begun intensive field work and sampling through the five month non-breeding season for migrant birds and are now training and involving the ACG/GDFCF parataxonomists in data collection. This project mist net-captures birds and quickly releases them, rapidly obtaining a fecal sample while the bird is temporarily in a virgin cloth bag. The sample will then be DNA barcoded in an attempt to determine what the birds are eating during their non-breeding visit to ACG. We appreciate the start-up support from the Eppley and Lynn Chase Wildlife Foundations, and new support from the U.S. Fish and Wildlife Service.

Left: Natalie Sanchez and Pablo Elizondo (center) with CRBO volunteers in the ACG’S Caribbean forests. Right: A mist-netted Wood Thrush, a neotropical migrant of concern to the international bird community due to habitat loss and declining populations everywhere.

Ongoing technical science research from ACG, with co-authorship by Dan and Winnie and their international taxonomic collaborators, is an important aspect of ACG conservation management. In this year alone, at least ten formal major papers have been published, frequently describing new species that have been previously “hiding” inside the name that was given to a species previously identified by its morphology alone. The power of DNA barcoding, one aspect of genetic analysis, continues to reveal that the biological word is more complicated than perceived, especially in the tropics where many “cryptic species” live. A list of new papers can be found on GDFCF’s website (http://www.gdfcf.org/publications) and any specific one obtained by email to djanzen@sas.upenn.edu 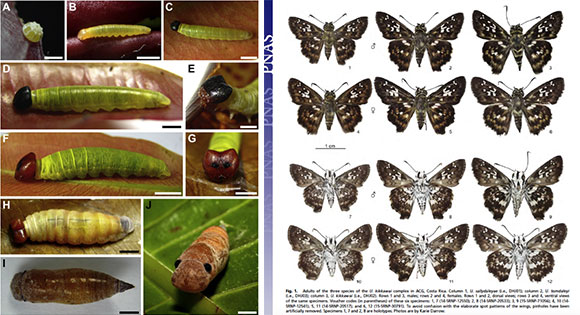 To date, the bioinventory of ACG’s Sector Marino (“BioMar” project) has catalogued 594 species, growing the list of known species from this area of the tropical Eastern Pacific ocean by over 200. Over the course of the year, BioMar teams made ten trips to ACG islands and coastlines to collect samples. These teams are made up of our marine parataxonomists, who are based in the small fishing village of Cuanjiniquil, and Universidad de Costa Rica researchers. In addition, the BioMar scientists suspect that several new undescribed species have been found, including four species of red algae, two species of octocorals and six species of crustaceans. As part of the BioMar inventory, the first batch of samples containing various sea worms, crustaceans, and mollusks went to the DNA barcoding laboratory at the Centre for Biodiversity Genomics at the University of Guelph for DNA barcoding. This collaboration -- between ACG, GDFCF and the University of Costa Rica’s CIMAR marine research institute  -- is the only marine bioinventory project of its kind in the eastern Pacific region. We are grateful to have the leadership of Dr. Jorge Cortes Nuñez from CIMAR and GDFCF board member Dr. Frank Joyce, as well as support from the Wallace Genetic Foundation, ACG itself, the New England Biolabs Foundation, and the Wege Foundation.

Major repairs were made this year to the former Microbiology Laboratory located in the ACG’s Area Administrativa in Sector Santa Rosa. The upgrades included plumbing, electrical wiring, roof, walls, paint, and even a new kitchen. This laboratory was originally built as an NSF- and ACG-supported Microbiology Observatory, and was used by visiting microbial researchers and then Dr. Marilyn Roossink, who was inventorying plant viruses. Today, this building has been repurposed as the new office for our local financial bookkeeper, Felipe Chavarria, and as a marine laboratory for use by Dr. Caroline Palmer Puschendorf and the marine parataxonomists. Our thanks to Felipe, and Sigifredo Marin, our local program manager, who coordinated these repairs, and to Jessie Hill, Tejas Patel, and the many other donors who contributed to Caroline’s Kickstarter campaign to raise funds for the purchase of marine lab equipment.

The restored MicroBiology Lab, now the home office of Felipe Chavarria and the new marine lab that is steadily gearing up with new equipment for analyses by Dr. Caroline Palmer Puschendorf, pictured here with GDFCF Board member Jessie Hill.

We are proud to keep our organizational structure to a minimum so that the majority of our resources can go to support our parataxonomists in the field, maintain our research stations, buy land where opportunities occur, foster community-based conservation education, enhance marine protections, and co-support the operation of ACG in diverse ways.  And, as the above stories indicate, our work is made possible by the financial and sweat-equity generosity and volunteer support of many individuals and organizations both large and small.

Our best wishes for the Holiday Season and New Year from Eric, Dan, Winnie, Tom, Caroline, and our Costa Rican leadership team of Sigifredo, Luz Maria, Alejandro, Felipe and Federico, as well as the entire GDFCF Board of Directors and Advisors.

Thank you again for your support.