Fig. 1. Top side (right) and underside (left) of a male Archaeoprepona demophoon butterfly (Nymphalidae). The silvery gray matches the tree bark where he feeds on fermenting sap in a tree wound, with his wings tightly closed over his back, the size of the palm of your hand. The brilliant color, flashed in the face of a potential pursuit predator, says two things. To the experienced bird it says, hey, I am way too fast, don’t bother to even try. To the same or other birds, it says, hey watch me as I fly, fixate on my very obvious colors, and then poof, when I alight, wings closed, I am abruptly a piece of tree bark. Now, just where did that butterfly go?

I stepped out the door of our tin-roofed house in the Sector Santa Rosa Administration Area into a windy hot dry sunny March day. In my face was the shrubby 2 m tall teenage canelo tree (Ocotea veraguensis, Lauraceae, the avocado family) with its evergreen shiny leaves, so very visible among the generally leafless other plants. And at that moment, a bright iridescent blue flash circled the shrub, very, very fast. She knew she had the shrub in her smelling sights. She had touched down on enough of the other shrubs within 2-3 m to know that this one was it. I stood back and watched, motionless, because she was also watching me - big, dark, and motion means dangerous in this crucial moment in her life. She landed for a moment on a leaf, lifted off, touched down, lifted off…. In 5 minutes, she probed about 10 leaves - high, low, inside, on edges, and finally settled onto the underside of one for perhaps 2 seconds. When she lifted off and was gone in a flash, on the under flat surface was one pearly pink globe almost 2 mm in diameter (Fig. 2), firmly glued to the leaf, a leaf 40 cm above the ground. I stared in amazement at this gift from her world high in the tree crowns where she feeds on fermenting fruits and sap in tree wounds for her months of life. She came, she found, she tested, and she decided – THERE is where my egg goes.

I stepped back into the house to get my camera – I had never seen an egg of Archaeoprepona before, much less one from Archaeoprepona demophoon, even though this large stout butterfly is “common” and can be trapped with bait of fermenting bananas about anywhere in ACG dry forest (and rain forest as well). Ten minutes later, as I stooped to take a picture, another bright blue flash said wait. I stood back, she circled, checked, leaf after leaf, and after examining another 5-10 leaves, settled to lay another egg – on the underside of exactly the same leaf. Over the next 10 minutes, a total of 4 eggs, 2 two on the same leaf, and two on other distant leaves. Maybe it was several mothers, but I suspect it was just one, returning to just the right leaf on just the right shrub. 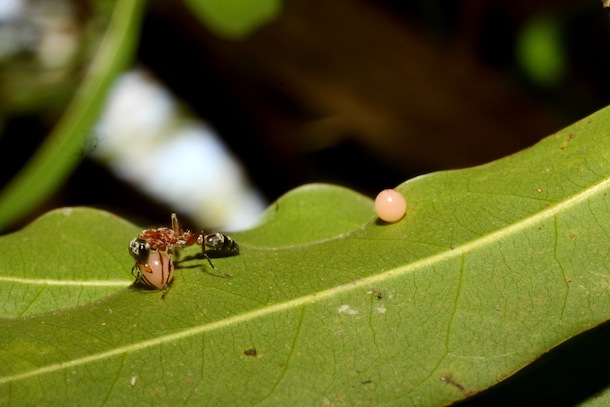 Yet all was for naught, for her. As I photographed, a 10 mm Pseudomyrmex gracilis ant, doing its usual arboreal foraging for insect prey (their colonies are in hollow twigs) found her first egg. After much struggle to lever the newly glued egg off the leaf, the ant carried it off to feed her kids for lunch.  Shortly after, she returned and the second egg met the same fate.

But had the egg survived, and the tiny caterpillar eaten as caterpillars are inclined to do, it would have produced a leaf-mimic caterpillar perched on the midrib of its lunch, breakfast and dinner (Fig. 3). 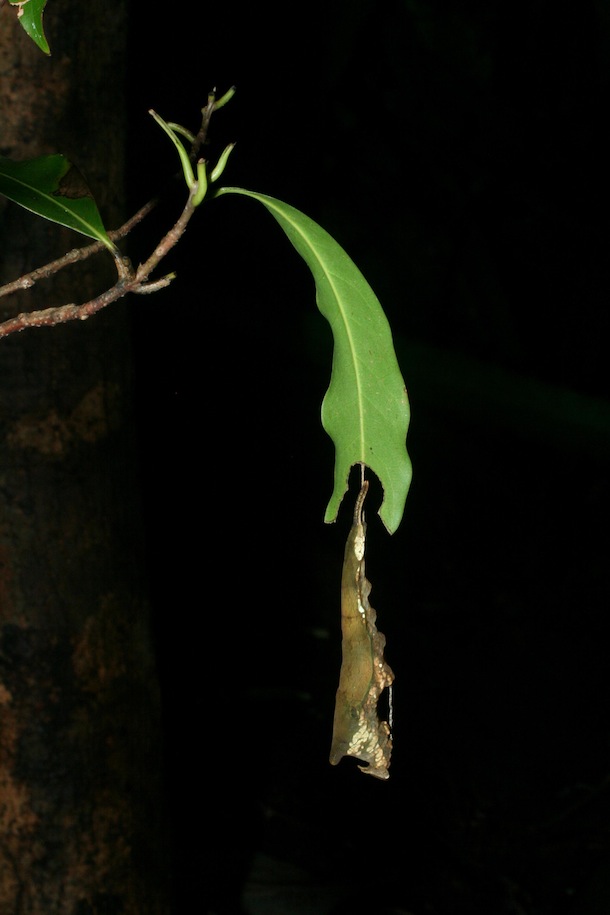 Fig. 3. The resting Archaeoprepona demophoon caterpillar, hanging head down at the tip of the leaf it has just eaten part of, hoping to fool the passing birds and monkeys into thinking it is just a rotting dead leaf, of no food value (6 November 2010, Area Administrativa, Sector Santa Rosa, ACG).

But there is one that the caterpillar cannot fool, one that looks more with its nose than its eyes  --  a small Microcharops MC-8 wasp that finds the young caterpillar and injects an egg into it. After feeding on the caterpillar’s innards for a few days, it emerges from the hanging cadaver and descends on its own silken thread to spin its cocoon, hopefully out of mind and sight of ants, birds and monkeys (Fig. 4). 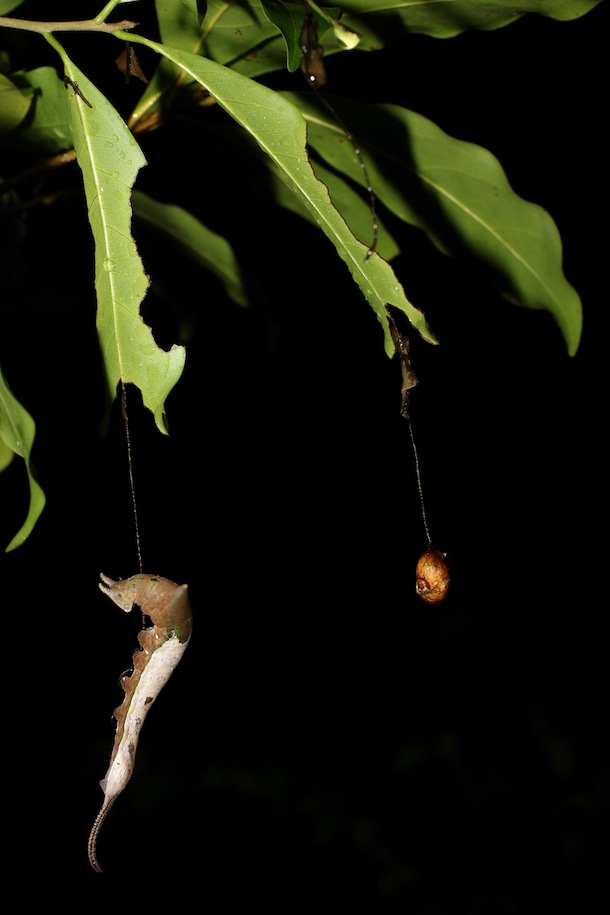 Fig. 4. On the left, an Archaeoprepona demophoon caterpillar perches motionless, mimicking a dead leaf as it waits out the day (they feed at night), on the midrib of the leaf it has just consumed. On the right hangs the silk cocoon wrapped in the pelt of its less fortunate caterpillar sib who has just had its innards eaten by the larva of a Microcharops parasitic wasp (Ichneumonidae), who then spun its cocoon on that caterpillar's silk thread. This Microcharops belongs to a undescribed species, called Microcharops MC-8 for now. (15 August 2013, Area Administrativa, Sector Santa Rosa, ACG) 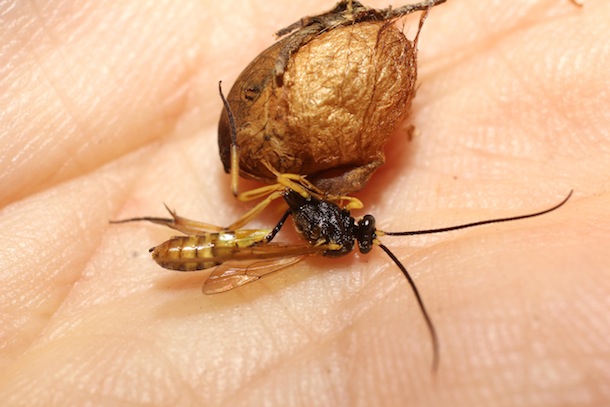 Fig. 5. A newly emerged Microcharops MC-8 parasitic wasp lies next to its silken cocoon, enveloped in the thin “skin” of the caterpillar that it ate in its own development (25 August 2013, Area Administrativa, Sector Santa Rosa, ACG).

But had the caterpillar survived, after two more weeks it would have moved up onto the branches to rest when not feeding, now looking like a dead leaf fallen from above (Fig. 6) in its last instar before molting. And if a bird is lucky enough or clever enough to confront our friend, there is yet another defense, as displayed by all the species of ACG Archaeoprepona, who are so very adept at turning into snake mimics. 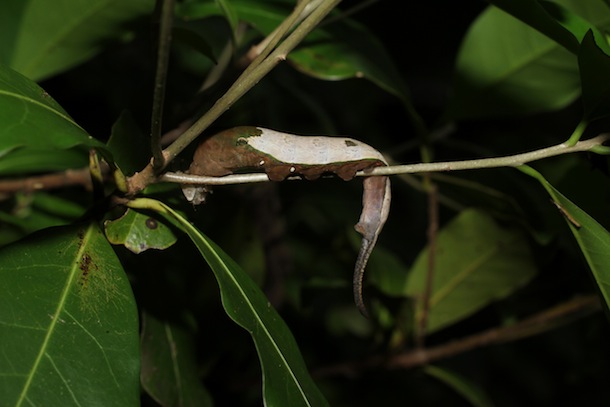 Fig. 6. A last instar caterpillar of Archaeoprepona demophoon rests/hides during the day, looking for all the world like a dead leaf fallen from above and perched across a horizontal twig.  If approached, it first rocks back and forth on the twig, seeming to be buffeted lightly by whatever breeze there might be (18 August 2013, Area Administrativa, Sector Santa Rosa, ACG).

But even after growing to be a large and plump caterpillar, the long risky ride is not over.  A female Winthemia tachinid fly finds her now, and glues her eggs to the thorax (Fig. 7). The Winthemia maggots will drill into the caterpillar soon after, and turn on to eat the butterfly once it has made a pupa 1-2 weeks from now. 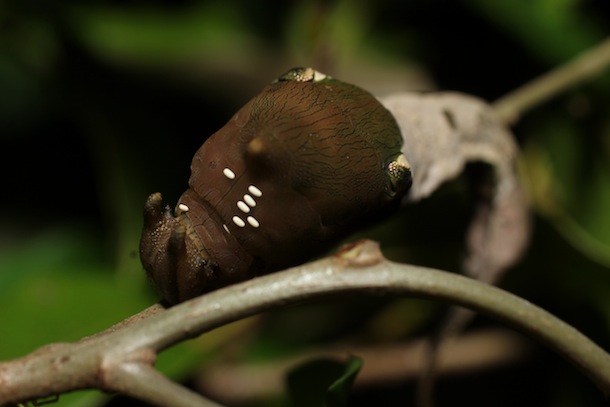 Fig. 7. The snow-white eggs of a Winthemia tachinid fly glued firmly to the caterpillar in its final eating period before pupating. They signal that even though the caterpillar escaped parasitization by the Microcharops wasp, all is not well.  The larval flies are hidden somewhere in the caterpillar, waiting until it has pupated and is a full sized source of food, before turning on their feeding and consuming in this dog-eat-dog world. And even these flies do not have the last say. Unknown, one presumes, to their mother, a mother Chrysotachina tachinid fly got there first with her two eggs, and when this picture was taken this fly's two offspring are already eating away at the insides of this caterpillar, to win the race in the end (18 August 2013, Area Administrativa, Sector Santa Rosa, ACG).

But of course sometimes the caterpillar does win, or else we would have no butterflies. And when it does, this nice big bag of nutrients, oh so delicious to any insectivorous bird or monkey, takes on yet another dead leaf color and form (Fig. 8).  The pupa is yet another leaf, this time appearing to be a green living leaf (Fig. 9). And then if all is well, and no exploring parasite or predator finds this juicy morsel, six weeks later we have a healthy butterfly, who lives out its months until it is lunch or its wings wear to nothing (Fig. 10). 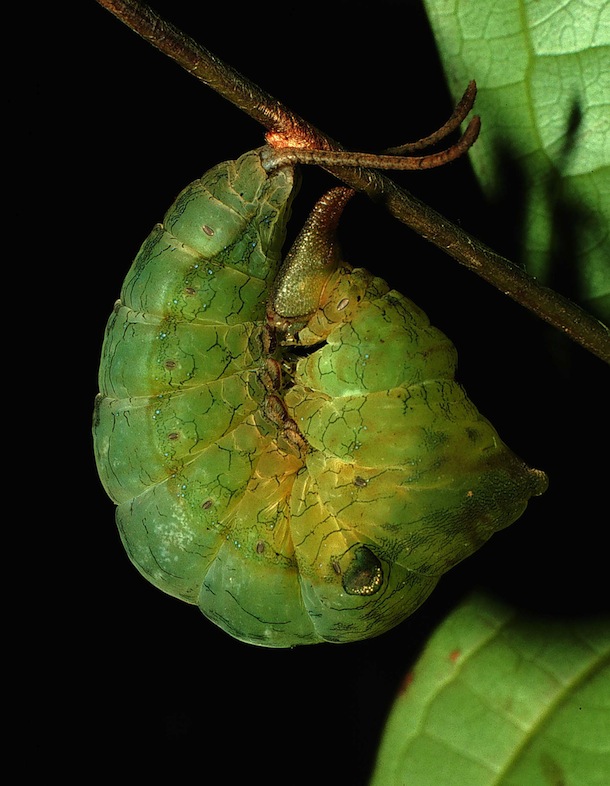 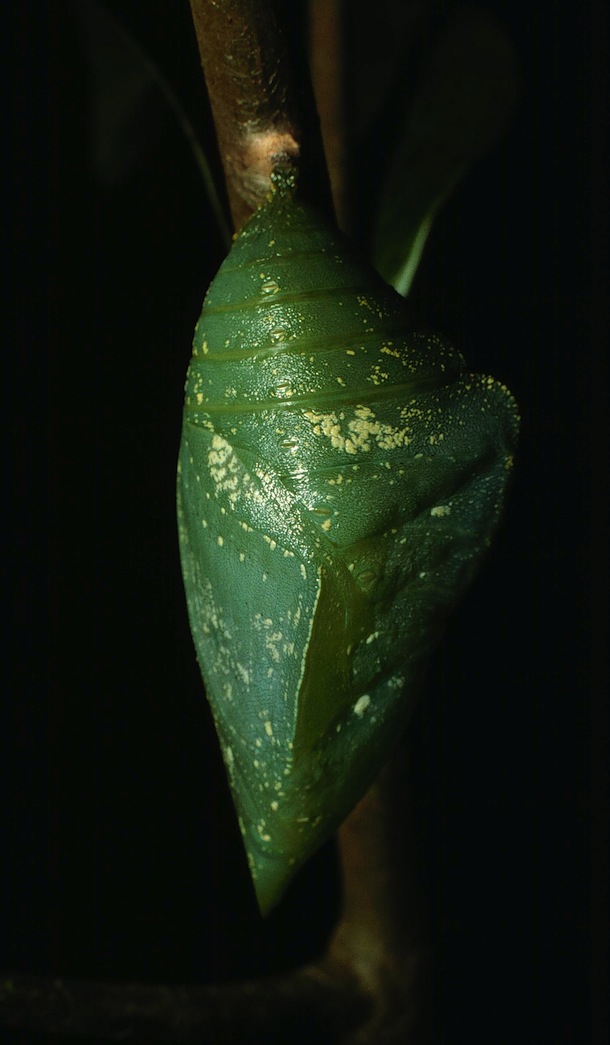 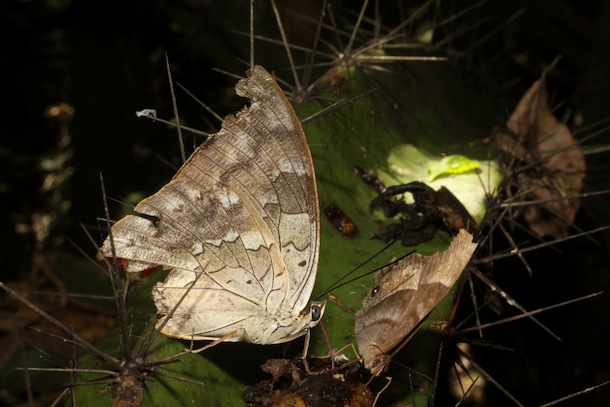